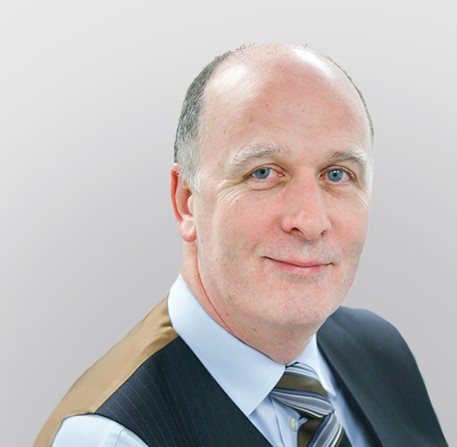 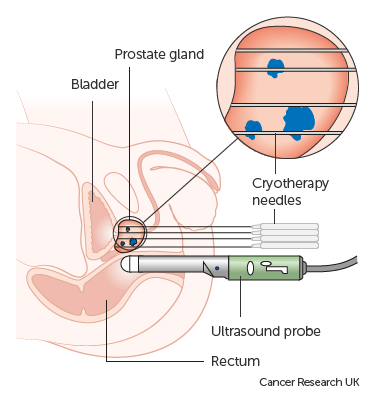 The aim of focal cryotherapy treatment for prostate cancer is the same as for HIFU
It is technically possible to treat anterior tumours using HIFU, but it is sometimes difficult to reach them, particularly in large prostates and these can be better treated by an alternative energy source, Cryotherapy.
Cryotherapy can be directly applied to any part of the prostate while HIFU has to travel through tissue to act and this can cause difficulty in the anterior prostate. Cryotherapy is at least equal to  to HIFU in treating lesions in the posterior prostate.
Cryotherapy or cryoablation involves freezing areas of the prostate leading to destruction of the cancer cells. Ice crystals form inside and outside the cells causing them to subsequently burst. In addition to this slowly thawing the cells by heating has been shown to lead to even better cellular destruction.
Cryotherapy has been around since the 19th century when crushed ice and salt was used to get temperatures as low as -24oC to treat breast and cervical cancers. For the past 100 years cryotherapy has been used to treat lesions of the skin. The most modern cryotherapy systems are produced by Galil Medical, a subsiduary of BTG plc which has recently been purchased by Boston Scientific.
Recent technological and surgical advances have allowed the development of ‘3rd generation’ machines which can accurately control temperature down to -190oC (using argon gas under high pressure) and accurately target the cancer cells by passing special cryo-needles under ultrasound guidance through the perineal skin. Using intra-operative ultrasound also allows direct visualization of the ice-ball and thus the area of the prostate being treated.
Although the prostate is clearly seen on ultrasound the cancerous cells are not commonly visible. With the additional use of fusion technology, which combines ultra-sound and a high resolution 3T mpMR scan, further improvements in targeting of the cancer can be achieved as this allows the visualisation  of the majority of cancerous areas in real-time during the operation.
Cryotherapy has successfully been used to treat the whole prostate (whole-gland treatment) with some showing results to be comparable to radiotherapy. The recent focus has been on focal treatment for both primary and salvage (after radiotherapy) prostate cancer. With focal treatment only the cancerous area’s are treated leaving behind the normal, healthy prostate and thus minimising any potential side-effects.
We recently reviewed the world literature for focal cryotherapy, which shows very promising short and medium term results. After 5 years no man died from his cancer and between 71 – 93% were free from biochemical recurrence (rising PSA).
The procedure is normally performed in the day case setting under either a general or spinal anesthesia. A catheter is normally left in for 7 days before being removed.
As mentioned previously, one major benefit of focal cryotherapy is that side-effects are generally very low. There may be a slight discomfort or bruising in the perineum due to passage of special cryo-needles. Incontinence (leakage of urine) occurs in 1% of patients with erectile dysfunction in 10%. Additionally there is minimal blood loss and infection occurs in 1%, whilst fistula rates are <1%.
Follow-up is via a mpMRI performed at 2 weeks and again between 6 – 12 months along with 4 monthly PSA tests. Due to low level of side-effects with focal therapies such as cryotherapy if cancer is found to recur then a second treatment can be given effectively and safely.
Focal cryotherapy treatment for prostate cancer is currently only available from very few surgeons. They are listed in the next page.
Galil medical - BTG website
Focal Cryotherapy video